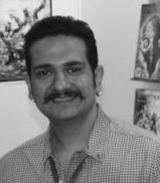 A BFA graduate, Vivek started out by working as a freelance illustrator with Star Plus and various advertising agencies. Having discovered his love for the medium of comics, he began working, first as an inker with Raj Comics, and then as a penciller for Level 10 Comics, and finally followed up with his own initiative, Holy Cow Entertainment, India’s 1st comic book company started by an artist.

Whenever low on morale or when facing difficulties (which is usually on a regular basis), Vivek turns for solace to George Lucas’s words, “A plan is only as good as your belief in it.” That advice has carried Holy Cow Entertainment through its toughest times.

Holy Cow Entertainment has been nominated for awards in more than 13 categories and was winner of the best colorist awards at the 3rd annual Comic Con Awards in 2014 in Delhi.It has published multiple award nominee series, Ravanayan and Aghori, and now houses 14 people, including writers and graphic designers, who work as a close knit team .