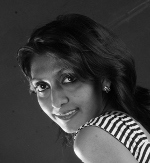 Ms. Prathibha Sastry has spent over 14 plus years in various entertainment-related activities. She began as founder of South Movie Scenes, a monthly English-language film magazine exclusively dedicated to the South Indian Film Industry, which gave the Industry its first global platform. She served as Publisher and Editor, and was responsible for the overall look and feel of the magazine. It was applauded by the British Council, which presented Ms. Sastry with the award for Young Screen Entrepreneur- India 2008-09. The award offered Ms. Sastry had the opportunity to represent India at the International Young Screen Entrepreneur Programme held in London during October, 2008.

Currently she is Head-Publications of JiniBooks and Co-Founder of JiniLabs. JiniBooks is India’s first Book Stand featuring a range of books right from comics, magazines, coffee table books to journals. JiniBooks will source out and collect the best of the books that are not easily available in the market and bring them to readers through JiniBooks. This free app on iPad will bring the next generation books – including small size, mid-size independent publishers, university presses, e-book publishers, and self-published authors – right at your fingertips.