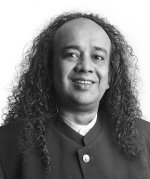 Peter Griffin is a journalist who works in Bombay. He has changed careers several times: prior to this, he has sold advertising space, wrote ads for ten years, then wrote columns, freelance travel stories and other features, produced websites, consulted on communication, assisted NGOs, compered live shows, did some voice-overs, was a part-time RJ and once hosted a TV show. He co-founded and moderates the writers’ forum, Caferati, and is joint editor of its imprint, Caferati Creative. For the last five years, he has co-curated the Kala Ghoda Arts Festival’s literature section. He also hosts the annual Godawful Poetry Fortnight online. He co-founded the South-East Asia Earthquake and Tsunami blog, and a number of successors, including Mumbai Help, all of which eventually became the World Wide Help group, an informal collective of volunteers for online disaster relief.