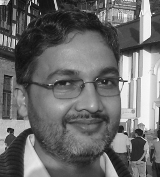 Gouri Nath has several several books to his name, among them Nach ke Bahar and Manus, in Hindi, and Daag, in Maithili. His stories, written in Hindi and Maithili, have also been published in various magazines and newspapers. After having worked for many newspapers, Gouri Nath spent close to a decade as the Asst. Editor of Hans, and is currently editor of the Maithili quarterly magazine, Antika, and the Hindi quarterly journal, Baya. He is also the founder and editor of Antika Prakashan that publishes the Antika and Baya, besides several literary works.

Gouri Nath has been honoured several times – with the Sahitya Kriti Samman and the Vidyapati Samman by the Hindi Academy, and by Yuva Puraskar by the Bharatiya Bhasha Parishad.

Gouri Nath is an M.A. in Hindi. He can be reached at antika56@gmail.com