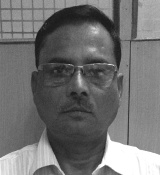 ​Dr. Suresh Chand has worked in various capacities with the Union Government of India and, the Govt. of Uttar Pradesh.  He was Assistant Director with the Indian Council of Historical Research (New Delhi), and subsequently served as Business Manager with Indian Council for Agricultural Research (New Delhi) during 1991 to 1993.  The same year, he joined the Department of Education, Ministry of HRD, Govt. of India as a Special Officer.  He was later the Registrar at Mahatma Gandhi Kashi Vidyapeeth (Varanasi) and Bundel Khand University (Jhansi).  Currently, he is Special Officer in the Dept. of Higher Education, Ministry of Human Resource Development, Govt. of India and is in charge of Copyright Registration and National Agency for the ISBN & Book Promotion Division.

Dr. Suresh Chand has written and published a number of papers and articles on several issues in national and international journals.  A Ph.D. from Mahatma Gandhi Kashi Vidyapeeth (Varanasi), Dr. Suresh Chand has also authored a book on Atal Behari Vajpayee’s role in Indian Politics.