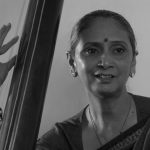 Vidya Rao is a performer of thumri-dadra and ghazal. For many years the disciple of the legendary singer, the late Vidushi Naina Devi, she continued her study of this form under Vidushi Shanti Hiranand and Vidushi Girija Devi. Her initial training in khayal was under the late Prof. B.N. Datta and thereafter under Pandit Mani Prasad.

She has performed at national and international forums to appreciative audiences, has lectured and conducted workshops and lecture-demonstrations, and has composed and sung for the theatre, film and dance. Her repertoire ranges over thumri-dadra, ghazal and allied forms, the songs of medieval sufi and bhakti poets, verses from Hindu and Buddhist texts and the Islamic forms of naat, soz, nauha etc.

She has also researched and written extensively on music and the performing arts. Her research and writing work has focused on gender and musical form. Her book, Heart to Heart: Remembering Nainaji, is a memoir of life with her guru Naina Devi.

Vidya Rao was the recipient of a Fellowship from the Ford Foundation, and a Senior Fellowship from the Ministry of Culture (Government of India). She has been Visiting Professor at the School of Arts and Aesthetics, Jawaharlal Nehru University, New Delhi, and Visiting Fellow at the Centre for Advanced Study, Jadavpur University, Kolkata. In 2012-2013, she was Fellow at the Institute of Advanced Studies, Nantes, France. In 2014 she was at an Arts Residency at Smith College and the Five Colleges Inc for performances and lectures. She has also been an adviser for the Kabir Project, has recorded a CD for them and also done several translations of texts for the booklets brought out by the project.

She has recorded several CDs including for the Kabir project. Her special contribution to this project has been understanding the relationship between Kabir’s philosophy and the musical form thumri.

She is currently working on several projects including composing the poetry of Dakhani poets; and writing on the gendered voice of lament songs. Most recently she was invited by the National Museum to sing Dakhani poetry during their exhibition Nauras on the arts of the Deccan; the Museum later repeated this performance by popular demand.

Apart from her work as a singer and musicologist, Vidya Rao has been a member of the Board of Studies at the School of Arts and Aesthetics, JNU. She continues to lecture occasionally at the School and guide M Phil and PhD scholars. She is visiting faculty with the Beeja Vidyapeeth (Dehradun), with Maatrika (Delhi), and at the Deer Park Institute (Bir, Himachal Pradesh), where she is also a member of the Advisory Board.

Vidya Rao has worked for over 30 years as an editor with Orient Blackswan Publishers; she now works with them part time as an editorial consultant.