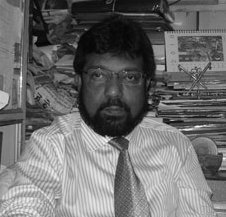 Subhabrata Deb established his own publishing house, Akshar Publications, in the year 1989 primarily with the aim of providing a platform for North East Indian authors as also for introducing the literature of the region to readers in the rest of India and abroad. He has represented North East India at most of the leading book fairs for the last two and half decades and recently attend the Frankfurt Book Fair in 2006 and 2012, the Beijing International Book Fair in 2010 and the SAARC Trade Fair held at Dhaka in 2011.

Mr.Deb has been associated with National Book Trust, India and the Centre for Book Publishing, University of Calcutta as teaching faculty for their publishing courses. He has served as Secretary of Tripura Publishers Guild for about 10 years. Presently he is Emeritus Secretary of the Tripura Publishers Guild, Agartala, and is actively associated with the conception and establishment of the proposed Research Institute for the study and documentation of culture in Tripura.

2013 marks the 25th year of Akshar Publications. Till date, about 400 titles have been published in different languages, primarily in Bengali, Kokborok, Manipuri and in English. Akshar Publications has now become a name synonymous with books and publication in Tripura and the entire North East.