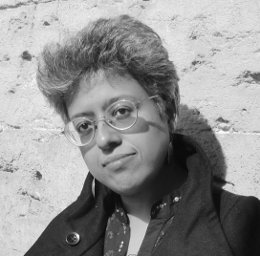 Sampurna Chattarji is a poet, novelist and translator with ten books to her credit, and three forthcoming. Her two poetry collections are Sight May Strike You Blind (Sahitya Akademi 2007, 2008) and Absent Muses (Poetrywala, 2010). Her poems have appeared in journals such as Stand Magazine, Wasafiri (UK); Drunken Boat, The Literary Review (USA); Wespennest (Germany), Interlitq (Argentina), Carapace (South Africa); The Little Magazine, New Quest, Chandrabhaga, Indian Literature (India); and anthologized in 60 Indian Poets (Penguin); Both Sides of The Sky (NBT); We Speak in Changing Languages (Sahitya Akademi); Interior Decoration: poems by 54 women from 10 languages (Women Unlimited); Imagining Ourselves (IMOW, San Francisco); Fulcrum (Fulcrum Poetry Press, US), 100 Poets Against the War (Salt Publishing, UK); The Bloodaxe Book of Contemporary Indian Poets (Bloodaxe, UK) and The HarperCollins Book of English Poetry. Sampurna’s translation of Sukumar Ray’s poetry and prose Abol Tabol: The Nonsense World of Sukumar Ray is now a Puffin Classic titled Wordygurdyboom! She has also translated the Bengali poet Joy Goswami; and authored several books for young people, including The Fried Frog and Other Funny Freaky Foodie Feisty Poems (Scholastic 2009). Her two novels are Rupture (2009) and Land of the Well (2012), both from HarperCollins. Her most recent book is Dirty Love (Penguin, March 2013), a collection of short stories about Bombay/Mumbai, of which the Sunday Guardian said—“like Jeet Thayil’s Narcopolis, this too could only have been written by a poet whose words brim with ambiguity.”

As a writer, Sampurna is deeply interested in sequence, shape and structure; in ways of looking that estrange the familiar and familiarize the strange; in reality as a composition of fragments, demolitions and disappearances.  Increasingly she has been viewing poetry in the light thrown on it by other disciplines (visual arts, mathematics, science, philosophy). She has been part of several international translation workshops organised by Literature Across Frontiers, CiPM (Centre of International Poetry, Marseille), Pro Helvetia, the British Council and Wales Arts International, working with poets from Wales, Ireland, Scotland, France, Switzerland, Iceland and Estonia. Her own poetry has been translated into the languages of these countries, as well as into Bangla, Tamil, Kannada, Manipuri and Bambaiyya. She has also collaborated with and responded to text, art and images by the Swiss writer, media art and cultural theorist Nils Röller, and artists Barbara Ellmerer and Yves Netzhammer, on the “Journal für Kunst, Sex und Mathematik”. Sampurna was the 2012 Charles Wallace writer-in-residence at the University of Kent, Canterbury. More about her can be found at: http://sampurnachattarji.wordpress.com/