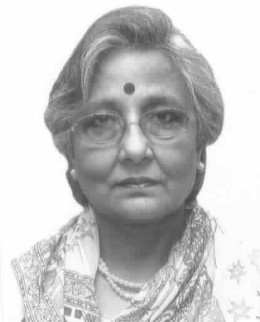 Primarily an author for children, Nilima Sinha is one of the best known children’s authors of mystery-adventure stories. Her published books include The Chandipur Jewels, Vanishing Trick at Chandipur, Adventure on the Golden Lake and SOS From Munia – all prize-winners for Best Fiction. Her Adventure Before Midnight was selected for the White Raven List for libraries internationally. Mystery of the Falling Mountains is another popular novel written by her.

She has also written a variety of fiction, including historical fiction, fantasy, countless short stories, plays and biographies. Her other notable books are The Yellow Butterfly, So Can I, Rishabh in the Land of the Flying Magicians and four books in the Save the Earth Series. Many of her titles are included in the curriculum in schools. She has edited and contributed to anthologies such as Our Leaders, Triumph of Non-violence, Together We Marched, Kamla’s Story, Mystery Stories- 1 and 2, M for Mystery-1 and 2, There’s Another Way, Stories From Across the Globe, Once Upon a Time in India, Road to Peace and Lighthouse in the Storm.

As translator, editor, researcher and storyteller, Nilima Sinha has been an active member of the Association of Writers and Illustrators for Children (AWIC), the Indian Section of the International Board on Books for Young People (IBBY). She was Vice-President, IBBY and is presently President, AWIC/Indian IBBY.

Nilima grew up reading books and wanted her children to enjoy books as much as she did. Fortunately they turned out to be great readers, but since children’s books those days were mainly from the West, she found her kids losing contact with their own culture, ethos, and traditions. To counter this alienation Nilima tried to create a book as exciting as any mystery-adventure from the West. The fact that it won a prize for Best Fiction from the Children’s Book Trust encouraged her greatly. Subsequently she wrote a variety of books, including historical fiction, biography, picture-books, plays, and short stories.

Her writing remains set firmly in the Indian milieu. She feels that there are endless possibilities for good literature to be created by delving into our rich and colorful heritage, that we have enough material to write about – exotic locales to set adventure stories in, precious gems from our ancient history to base stories on, folk tales to be revived, epics and mythology to dive into to create the most magical tales of fantasy, and incidents galore from the lives of great as well as ordinary people to build upon.

Nilima Sinha graduated from Delhi University and did her schooling from the Convent of Jesus and Mary, New Delhi. Married to a Member of Parliament from Jharkhand constituency she has lived in the area and is familiar with the problems of rural India. At the same time, extensive travels abroad have widened her horizons.