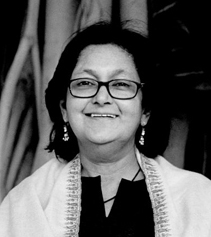 Writer, publisher and festival director Namita Gokhale is the author of eleven works of fiction and non-fiction. Her novels include Paro: Dreams of Passion, Gods, Graves and Grandmother, A Himalayan Love Story,The Book of Shadows, Shakuntala: the Play of Memory, and Priya In Incredible Indyaa, which resurrects some memorable characters from her debut novel Paro.

Passionately committed to showcasing writing from across the Indian languages, Namita Gokhale is a director of Yatra books and was until recently member-secretary of Indian Literature Abroad (ILA) an initiative to translate from the 22 Indian languages to the 6 Unesco languages.  She is one of the founder-directors of the Jaipur Literature Festival, co-director of Mountain Echoes: the Bhutan Literary Festival, and adviser to several literary initiatives.