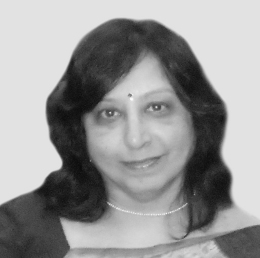 Menka Shivdasani is a Mumbai-based writer, with two collections of poetry. Her first book, Nirvana at Ten Rupees, was published by XAL-Praxis in 1990, and was described by Bruce King as “one of the best first books of poetry to appear during the 1990s” (Modern Indian Poetry in English, Revised Edition, OUP, 2001.) Her second poetry collection Stet first appeared in 2001. Menka is also co-translator of Freedom and Fissures, an anthology of Sindhi Partition poetry, published by the Sahitya Akademi in 1998, and subsequently republished by the Akademi in Marathi and Gujarati translation. She recently edited an anthology of Indian poetry for www.bigbridge.org, a 16-year-old arts and literary website in the United States. An anthology of women’s writing that she edited for SPARROW is expected shortly.

Menka’s poems have appeared in several publications, both in India and elsewhere. These include Poetry Review (London), Poetry Wales, Fulcrum (USA), the Bloodaxe Book of Contemporary Indian Poets, The Harper Collins Anthology of English Poetry and Both Sides of the Sky (National Book Trust). Her poem, An Atheist’s Confessions, has been included in the S.Y.B.A. English textbook of the University of Mumbai, Indian Literature in English: An Anthology, published in 2012.

An active organiser of various literary events, Menka is joint coordinator of the Culture Beat initiative at the Press Club in Mumbai. She is also Mumbai coordinator for the global 100 Thousand Poets for Change movement and a founding member of Asia Pacific Writers & Translators. In 1986, she had played a key role in founding the Poetry Circle in Mumbai. Her career as a journalist includes a stint with South China Morning Post in Hong Kong, and the publication of eight books co-authored with Raju Kane, two of which were released by the then Prime Minister Atal Bihari Vajpayee.