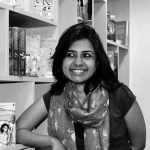 Manasi Subramaniam is Commissioning Editor and Rights Manager at HarperCollins Publishers India. She commissions, originates and acquires literary and commercial titles at HarperCollins, and has a significant international acquisitions list. In 2014, she set up the children’s imprint at HarperCollins India, Harper Kids. In 2015, she set up the crime imprint, Harper Black. In addition to commissioning and acquisitions, she oversees the domestic and international rights strategy, including the buying and selling of translation rights and publishing licenses all over the world. She works closely with the HarperCollins global strategy team, which enables publishing across 18 countries simultaneously. In 2012, she went to Frankfurt on the prestigious international fellowship programme, where she saw firsthand how the industry, which was at the time grappling with a downturn, turned to innovation as a method of survival. In 2013, the Bologna Book Fair celebrated its golden jubilee by inviting an international delegation of 10 publishers, hosted by the Italian Trade Commission, and Manasi was part of that group. In 2014, the Bureau International de l’Édition Française (BIEF) invited her to be part of its fellowship programme at the Salon du Livre in Paris. In 2015, the Australia Council for the Arts invited her to the Sydney Writers’ Festival as a Visiting International Publisher. Having attended book fairs all over the world, Manasi has extensive experience in dealing with both domestic and international rights.