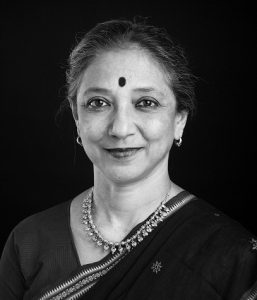 Leela Samson is a virtuoso performer and a sensitive interpreter of the nuances of bharata natyam. As a soloist, her seemingly understated delineation conceals an inspired inner source and strong foundation. She has choreographed a body of work called ‘Spanda’ known for its innovations in bharata natyam. It is now twenty years since its inception and Spanda continues to enthrall audiences with its innovativeness in tradition. The latest production she is working on is ‘Avani – the river’.

Leela has written ‘Rhythm in Joy’ for Lustre Press in 1987, on the classical dance forms of India and ‘Rukmini Devi – a life’ published by Penguin Viking in 2010, on the life of the legendary founder of Kalakshetra. She is the recipient of the Sanskriti Award in 1982, the Padmashri Award in 1990, the Nritya Choodamani Award in 1997, the Sangeet Natak Akademi Award in 2000 and the Natya Kala Acharya Award from the Music Academy, Chennai in 2015.

She was Director, Kalakshetra from 2005 to 2012, and brought to the institute an integrity and dynamism in teaching and performance and a widening of the academic scope of the dancer graduating from its portals, besides initiating several publications, films and documentation of the founder’s dance dramas.

Leela lives in Chennai and dances.