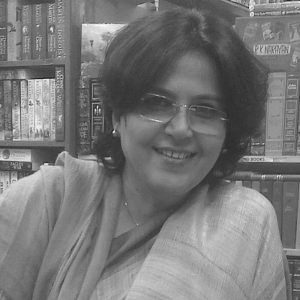 Dr Rakhshanda Jalil is a writer, critic and literary historian. She has published over 15 books and written over 50 academic papers and essays. Her book on the lesser-known monuments of Delhi, Invisible City , continues to be a bestseller. Her recent works include: Liking Progress, Loving Change: A Literary History of the Progressive Writers Movement in Urdu (OUP, 2014); a biography of Urdu feminist writer Dr Rashid Jahan A Rebel and her Cause (Women Unlimited, 2014); a translation of 15 short stories by Intizar Husain entitled The Death of Sheherzad (HarperCollins, 2014); and The Sea Lies Ahead, a translation of Intizar Husain’s seminal novel on Karachi (Harper Collins, 2015). She runs an organization called Hindustani Awaaz, devoted to the popularization of Hindi-Urdu literature and culture. Her debut collection of fiction, Release & Other Stories, was published by Harper Collins in 2011, and received critical acclaim. She was awarded the Kaifi Azmi Award for her contribution to Urdu and her translation The Sea Lies Ahead won the KLF Peace Prize awarded by the Karachi Litfest and the German Embassy.