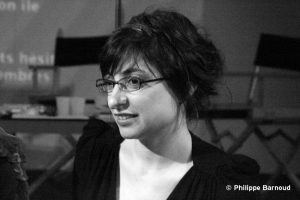 Aurélia Lassaque (b. 1983) is an Occitan and French poet. She is keenly interested in the relationship between poetry and music and has collaborated with musicians for numerous music and poetry shows. She has also collaborated creatively with various painters and visual artists for exhibitions in France, Italy and the US. Her poems have been translated into English, Italian, Asturian, Basque, Portuguese, Catalan, Spanish, Turkish and Finnish for numerous journals and anthologies. She regularly takes part in international festivals of poetry.

In 2010 she was artistic director of the Festival of European and Mediterranean Minority Literatures (held in Italy). She is also a book reviewer for regional television, literary adviser of “Paroles Indigo” Festival (held in France) and has dedicated her doctorate to Occitan baroque drama.