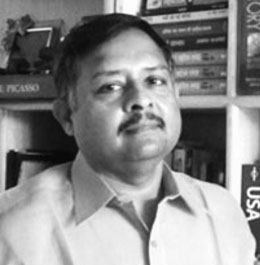 Arun Maheshwari is the Publisher and Managing Director at Vani Prakashan, India’s leading publishing house for Hindi language and literature. He is an extensive globe-trotter and has showcased Hindi literature in more than twenty countries with diverse socio-linguistic backgrounds. A passionate publisher, he explores new writers, genres and readers and has published more than 4,000 books. His tireless efforts to create a progressive body of literature have remained unfettered in the face of intellectual fascism and ideological fiefdom. He has been honored at the National Library, Sweden, Indo-Russian Literary Club-Russian Center of Art Cultureand by Polish Cultural Center for promoting Indo-Swedish, Russian and Polish literary exchange, respectively. He has been awarded the Distinguished Publisher Award instituted by The Federation of Indian Publishers in 2008 and is a distinguished member of Board of Studies at T. M. Nagpur University. He is the elected representative of the Indian publishing fraternity to the general body of Sahitya Akademi, India’s national academy of letters. Also, he is the nominated member of the Directorate of Hindi Medium Implementation, University of Delhi.