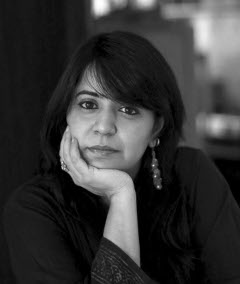 Anusha Yadav is a Photographer, Photo researcher & archivist and a Book Designer. She graduated in Communication Design from National Institute of Design, Ahmedabad in 1997.

After 16 years of in graphic design and advertising, Anusha also began working as an independent photographer in 2006. Her photographs have also been featured in well-known international and national publications.

In 2010, Anusha founded Indian Memory Project – World’s first online visual and narrative based archive. The project traces a personal history of the Indian subcontinent via photographs found in personal archives. The project has been invited to speak at the most respected of institutions, conferences and has featured in almost all national and international publications and media. Renowned photographers, academics, historians and journalists from all over the world, now cite the project as example.

Anusha believes that her attitude towards her work stems from the advise her uncle, noted author Rajendra Yadav, gave her when she was only 17 years old. “If you are going to do something in life, do it well, or don’t do it at all. Don’t waste other people’s time and your own by being mediocre,” he told her.  Those words have never left Anusha and have possible been her main motivation in work. Some of her initiatives may have failed but most have worked. Her internal compass, she happily adds, has seemed to always point to a direction where she can satiate her curiosity, about life and the world. And once questions were answered or at least articulated she could visualize a presentation of it aesthetically.  If not for people, at least for herself.

Anusha is an INK fellow of 2011, a L’Oreal Paris Femina Women Achiever’s award winner of 2013. In May 2013, she was also awarded Honorary Mention at the Prix Ars Electronica – 2013, an international award given for excellence in Cyber Arts.