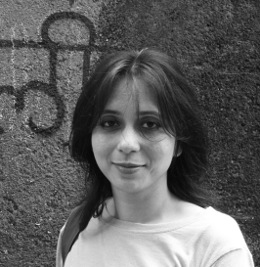 Annie Zaidi writes poetry, essays, fiction of varying lengths, and scripts for the stage and the screen. She writes in both English and Hindi. Known Turf: Bantering with Bandits and Other True Tales, her first collection of essays, was short-listed for the Vodafone Crossword Book Awards (Non-fiction, 2011) and was translated into Italian as I Miei Luoghi. The Bad Boy’s Guide to the Good Indian Girl, a series of interlinked fictional narratives about young women’s lives in the subcontinent, has been written in collaboration with Smriti Ravindra. She won the Prakriti prize for poetry in 2011. Crush, a series of illustrated poems, was made in collaboration with artist Gynelle Alves.

Her work has appeared in anthologies like Mumbai Noir; Women Changing India; Journeys Through Rajasthan; 21 Under 40; India Shining, India Changing; and literary journals including The Little Magazine, Pratilipi, Out of Print and Desilit. Her first Hindi play ‘Jaal’ opened at Prithvi Theatre in 2012 as part of the Writers Bloc 3, a playwright-focused theatre festival, in Mumbai. Her first English play Name, Place, Animal, Thing was short-listed for The Hindu Metroplus Playwright Award in 2009. A radio play Jam was short-listed for the BBC’s International Playwriting Competition, 2011.

She writes because she doesn’t know what else to do.