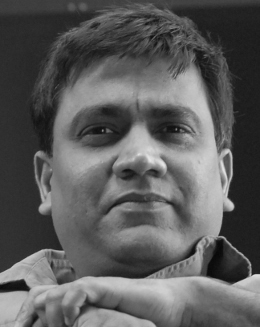 Anil Menon holds a doctorate in Computer Science from Syracuse University, where he specialized in the field of evolutionary computation. He spent about nine years working as a research engineer in a variety of software startups, and edited the volume Frontiers In Evolutionary Computation (Kluwer Academic, 2004). His stories have appeared in a variety of international magazines and anthologies. His short fiction has been translated into German, French, Chinese and Hebrew. In 2009, he helped organize India’s first three-week, in-residence, speculative fiction writing workshop at the Indian Institute of Technology in Kanpur, followed by a second workshop in Bangalore, sponsored by Just Book clc, in 2011. His novel, The Beast With Nine Billion Feet (Zubaan Books, 2009) was shortlisted for the 2010 Vodafone-Crossword Children’s Fiction Award and the Carl Baxter Society’s 2010 Parallax Award. Currently he is working on a new novel, and along with Vandana Singh, editing the Speculative Ramayana anthology (Breaking the Bow, Zubaan Books, 2012).

His experience at the Clarion West workshop in Seattle sparked his interest in what he refers to as the ‘literary-industrial’ complex, namely, the set of institutions and networks that help support the literary arts. This includes things such as magazine outlets, workshops, conferences, conventions, anthology series, prestigious prizes, access to mentors, literary associations, distribution networks, and reliable industry data. Writers without these opportunities have a much harder time in developing their skills. In India this complex is still quite rudimentary and heavily dependent on the West. He believes that it is therefore incumbent on the current generation of writers, editors, publishers and other stakeholders to invest in developing such mechanisms and opportunities. His own efforts are currently directed towards establishing a series of intensive workshops to expose newbie writers to the current state-of-the-art in their chosen genres.