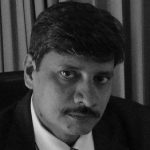 ​Allwyn Pais has been associated with the book industry since 1987, when he began a 10-year stint with Rupa & Co., after which he worked with India Book House as Area Sales Manager for the western region. Later, he briefly set out to explore the book market in East Africa (Tanzania) and opened a book shop there. He returned to India to again work for Rupa & Co. and managed their pan-India operations, opening branches in Bangalore & Delhi, besides in Mumbai and Kolkata, for ‘The World of Bbooks’.

Between December 2008 and March 2018, Allwyn ran his own book distribution business, the Amit Book Corporation. He prresently works for India Book Distributor, the No.1 distributor in India.

Having worked with practically all UK- and US-based publishers, including HarperCollins, Penguin Random House, Hachette, Pan Macmillan, Phaidon, Simon & Schuster, and Indian publishers including Rupa,Westland, Roli, Manjul, Speaking Tiger, and others, Amit believes he has grown with the book trade and that he knows nothing else but books. His wish is to see the book trade go back to its glorious days, when the publisher, distributor and retailer all had a smile on their face, and hopes many more bookshops will be set up all over India.