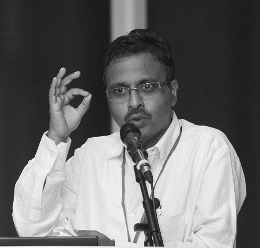 A. R. Venkatachalapathy, historian, author and translator, is Professor at the Madras Institute of Development Studies, Chennai. He has taught at Manonmaniam Sundaranar University, Tirunelveli, the University of Madras and the University of Chicago, and has held research assignments in Paris, Cambridge, London, and Harvard. During 2011–12, he held the ICCR Chair in Indian Studies at the National University of Singapore.

Chalapathy has published widely on the social, cultural and intellectual history of colonial Tamilnadu. Apart from his scholarly writings in English he has written/edited over twenty books in Tamil combining scholarly discipline with literary flair. His publications include In Those Days There Was No Coffee: Writings in Cultural History (Yoda Press, New Delhi, 2006), (ed.) Chennai, Not Madras (Marg, Mumbai, 2006), (ed.), In the Tracks of the Mahatma: The Making of a Documentary (Orient Longman, Chennai, 2006), (trans.) J.J.: Some Jottings (Katha, 2004), (ed.) Love Stands Alone: Selections from Tamil Sangam Poetry (Penguin, 2010), and (ed.) Red Lilies and Frightened Birds: ‘Muttollayiram’ (Penguin, 2011). He is the winner of the V.K.R.V. Rao Prize (2007).

His latest book, The Province of the Book: Scholars, Scribes, and Scribblers in Colonial Tamilnadu (2012),  published by Permanent Black, focuses on the history and culture of books, book publishing, and book reading in Tamilnadu from the time of parchment to the time of Pagemaker.