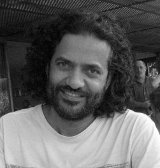 Sridhar Gowda, a literary agent and a publisher started his career in the book trade as a bookseller in the UK in 1994. In 1997, he co-founded an internet bookshop, selling over 3 million titles, and in 2005 co-founded Peak Literary Festival in the heart of the Peak District countryside. He curated the events for the festival for 5 years. He also co-founded Peak Platform, a publishing venture in the UK in 2009 and entered the Indian market in 2011.